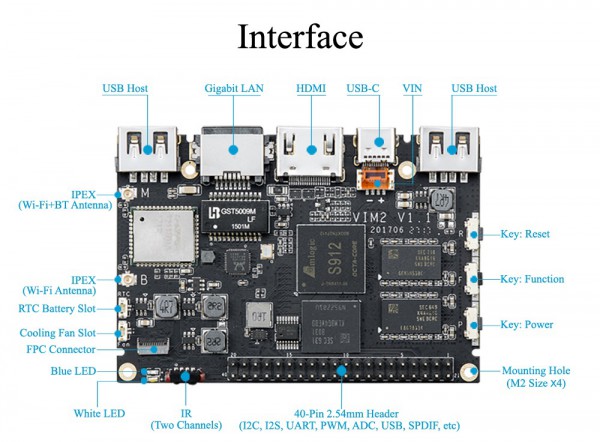 The Khadas VIM2 Max is a very special TV Box. TV Box is not even the right expression for this small universal mini computer.

The Raspberry Pi should be known to most users with an affinity for technology. This is a kind of small computer with all the connections and features you need. The Raspberry Pi can be used for various things, such as a media center "TV box", office computer, server or for more special tasks in the handicrafts sector.

The biggest strength of the Pi is its weakness, the price! The Raspberry Pi has become a power amplifier with generation to generation, but it is not really a power machine.
The Khadas VIM2 Max goes in a similar direction. This is also an open source platform, but it is equipped with a very powerful hardware, which makes it especially interesting for multimedia applications.

Especially the use with Android on TV is in focus. Let's have a look if the Khadas VIM2 Max Box can convince in the test!

The Khadas VIM2 "TV Box" is available in three versions, Basic, Pro and Max. The three versions differ by and large only in terms of RAM and memory equipment.

Accordingly, 4K 60Hz video and allegedly even HDR is possible via the HDMI output (I can't verify the latter).

But how powerful is this Amlogic S912 Octa-Core?

Let's have a look at some Android benchmarks.